Readers of this blog by now should know that I am a big fan of film noir. If you look at the literal meaning of film noir it translates from French as black film. By pretty much all definitions, films noirs are filmed in black and white and play around with darkness, light and shadows. While this is mostly true, there do seem to be a handful of exceptions. In this post I will look at a few of them and in the process challenge you to perhaps stretch your own definition of film noir a little. I guess since everybody thinks differently about what makes a film a film noir, I’m sure some of these choices could be endlessly debated and even I think a few of them are borderline noir myself. If you can make a better case of why one of these films is or is not a film noir, I would love to hear about it in the comment section.

In this post I will look at five films noirs that are filmed in colour. They are:

You might notice most of these films are from the mid-50’s. It’s around that time that the big studio systems were getting into major trouble. They had to give up the monopoly positions they had built up in the decades prior to the 50’s. Well actually they had to in the late 40’s, but they were really starting to feel the effects by now. Viewers were also lured away by novelty things such as television (can you imagine?) but also other forms of entertainment. This meant that the film industry was looking for ways to keep their audiences. In the late 40’s and into the 50’s things such as Technicolor, CinemaScope, 3D and VistaVision became quite popular. It even made its tiny mark on film noir. 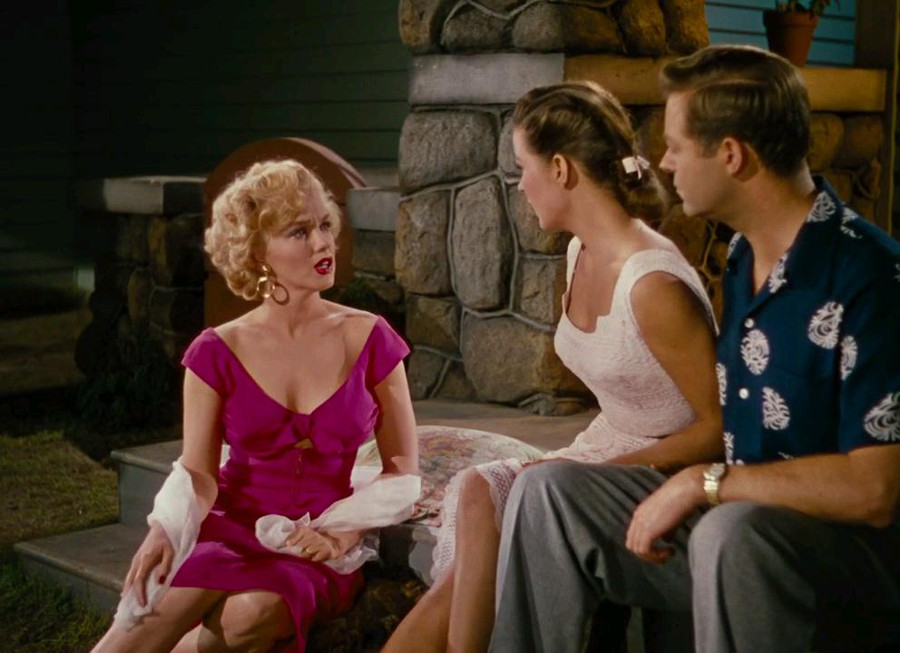 Perhaps not unsurprisingly there are not that many films noirs that were filmed in colour. I have seen six now, and there are only a handful more. I can recommend Niagara with a lead role for Marilyn Monroe. Others that are still on my watch list and that I’m hoping are going to be worth the watch are:

It’s a decent little list, but one can’t help but wonder where all the real classics are. In the case of film noir all classics are b&w films, and perhaps rightfully so. Film noir is playing with shadows, shady characters lurking in dark alleys, smoke spreading through a dark room. Black and white cinematography just conveys the darkness, gloominess and hopelessness of its stories much better. Leave Her To Heaven really is the only exception to the rule. Or is it?

Leave Her To Heaven

So let’s start off with the best one of the lot, which in my opinion can be considered as one of the better films noirs out there, including the entire load of black and white ones. This film is so dark that it just doesn’t need any b&w or shadows to colour it a very deep noir. It tells the story of how a man meets a woman and fall in love. Nothing new there, but the woman – played brilliantly by Gene Tierney – seems to have an odd way of loving someone. It starts off innocently enough, but it soon spirals out of control towards total destruction. Aside from colour this film has everything a regular noir is all about.

The poor man dragged into something he didn’t ask for, the femme fatale, fallout, death and a lot of human suffering. The strange thing about this definite film noir is that I think the colour actually adds to the overall darkish feel. That sounds very contradicting, but somehow it made me feel very uneasy to see that beneath all the beauty of the bright colours lied a world darker than most b&w ones. It may not be a surprise that Leave Her To Heaven got an Oscar for Best Colour Cinematography.

This one is probably the most debatable film of the lot. I must admit I wasn’t sure if I should pick this one or another more likely candidate, but I like Spencer Tracy and adding a bit of western to the mix felt nice so there you go. A mysterious man – Spencer Tracy – arrives to a small desert town by train. When he starts to stir up trouble by digging into the town’s painful past things get ugly. This film is about as much a film noir as it is a western.

There are no typical western gun fights, cowboys, cattle ranches and what not. It just takes place in a little town in the desert. It might be called a film noir because of the film’s general atmosphere, but obviously not because of its beautiful use of b&w. It doesn’t really have a true femme fatale either, but it isn’t that far off. Other reasons to call this a film noir might include the atmosphere, which I must admit was pretty neat. There’s an overall ugliness in the air, a strange kind of tension that would fit a film noir nicely. However I think this one is a regular thriller more than anything else, but it has a nice dosage of darkness.

Party Girl is a late noir period film in which you can really start to see the end of an era. There is a bit more ‘sex’ in this film than what you’d see in most noirs. It’s not sex in the literal sense, but just that the skirts are a bit shorter, the movements are a bit sexier and so on. This film thrives on a wonderful performance by Cyd Charisse, a professional dancer/actress. She plays a night club performer and femme fatale and her dances are wonderful and may remind you of Moira Shearer in The Red Shoes. In Party Girl a successful criminal attorney – played by Robert Taylor – meets said dancer. There is some attraction, but the fact that he defends the counties worst criminal Rico is reason for her to try and talk him into becoming legit. Of course Rico and his gang do not approve, because then their lawyer could very well start to sue them.

The night clubs, jazzy music and criminal activities are what make this a nice little film noir and there doesn’t seem to be much of a reason to doubt its classification as one. In this case though I don’t see the added value of colour. The criminal nature of this film could’ve used some dark alleys or smokey gangster meetings. Having said that, this is still a pretty nice film to watch. Colour might not add much here, but it also doesn’t make it much worse. It’s still a nice story typical for film noir, and being released in Q4 of 1958 it is also one of the last of its kind.

I Died A Thousand Times

Up to this point I still have no idea what the title is all about, but that doesn’t really matter. If any of these five films is a film noir it’s this one. Why? Because it’s a remake of the Bogart/Lupino High Sierra (1941), one of the early films noirs. Sadly it doesn’t come close to the original in quality, but because it tells the exact same story it’s pretty much impossible to dismiss it as film noir. The only difference besides obviously its cast is that it’s shot in colour. I Died A Thousand Times tells the story of Roy Earle, a big time crook who was just sprung from prison to lead a jewel heist.

Along the way he meets a girl, a dame and a dog. Oh and also a painfully Mexican Mexican and two dumb mugs. One of them is played by a young Lee J. Cobb, which makes this film at least a bit interesting. The cast doesn’t do so bad really though but they’re just not Bogart and Lupino, and in the end one has to wonder why this was even made to begin with. But the story is good enough and that somewhat saves this film from being a total waste of time.

Black Widow is another Gene Tierney film noir in colour. It also stars Ginger Rogers, Van Heflin and a few other big names. It’s a shame that the film itself doesn’t reach above mediocrity. It’s about a low class girl who more or less forces herself into a higher class, leaving behind a trail of destruction. The noir in this one mostly comes from the big city backdrop and the deadly woman working her way through society. Eventually it turns into a bit of a whodunnit with detectives and all, another big part of many films noirs.

I personally felt that this one was kind of lacking the overall vibe of a true film noir, but I can live with its classification as one. It does contain enough elements to be called one, however it suffers in the execution. The all-star cast really doesn’t quite deliver, except from an excellent Ginger Rogers. I would be more content calling this a mystery thriller or something along those lines, rather than a film noir.

So looking back at this contradictio in terminis, can we stretch the boundaries of what is film noir to include films in colour or can’t we. It certainly seems strange, but Leave Her To Heaven shows that it is possible. It also seems strange to dismiss an almost literal remake of High Sierra simply because it was filmed in colour. Others are more debatable, but I think with 3 or 4 definite noirs it is safe to call this a minor niche in film noir overall. It only gave us one classic, but also a few pretty good and fun to watch early colour films that may or may not be film noir. I guess that’s the important bit to take from this. Regardless of how these films should or shouldn’t be labeled, they are fun to watch and so you should watch them. Film noir has stood the test of time quite well in most cases, so there really isn’t any reason not to!

A little spoof on a lot of film noir concepts and there’s some German Expressionism in there as well. Just for fun.

Viridiana is a nun who is ordered to meet her uncle before taking her final vows. A Buñuel masterpiece so disturbing Franco thought it necessary to ban it.

Ten not-so-well-known or downright obscure films that should be on your watch list as of right now. The Film Top 10 – 2016! 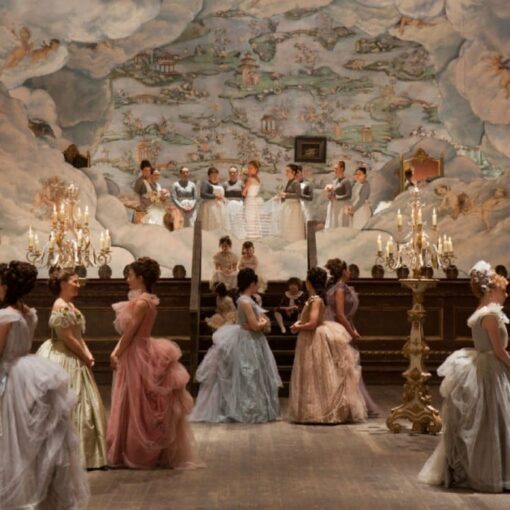 One thought on “Film Pas Noir”