Early Summer 1953, The Wages of Fear was just released and director Henri-Georges Clouzot was looking for a new film to make. Right before the eyes of the master of suspense himself, Alfred Hitchcock, he got his hands on the rights to film the book ‘She who was no more’. Looking back, we should be happy he did, because the result inspired Hitchcock to make Psycho. The writers of the above novel also wrote ‘D’Entre Les Morts’. We know this one better by its film name Vertigo, but I’ll write a little about that some other time. These two films stand out as the two best films in their field. A combination of a mystery thriller combined with, by today’s standards, mild horror. 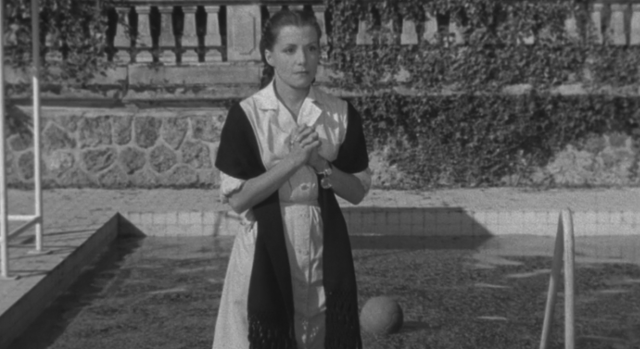 Hitchcock is supposed to have named Les Diaboliques as his favourite horror film. I couldn’t agree more. As I mentioned, the whole reason Psycho exists is because of this film. He wanted to outdo Clouzot in every aspect of the film. Make it creepier, more mysterious, add in some of his Hitchcockian suspense and make an altogether better film. While I believe Les Diaboliques to be the better of the two, there should be no question that these two films are among the best ever made.

Psycho and Les Diaboliques are so much alike it’s easy to notice even if you don’t know anything about either film. As mentioned both have a similar theme, but that’s not nearly all. Where Psycho has its famous shower scene, Les Diaboliques has an equally horrifying – albeit less known – bath scene. We are only let in on ‘the secret’ at the very end of both films and in each we – the audience – are asked not to reveal the ending to those who have not yet seen the film.

One more interesting thing to note is that this film has inspired a great detective we all know and love: Lt. Columbo. Yes, Peter Falk’s character was modeled after the somewhat strange sleuth Alfred Fichet we meet in this film. Even to the point of copying his signature line ‘just one more question’ right when he is about to leave. Without overdoing it, this adds some dark humour to the story.

At the beginning of the film we find ourselves in an old building housing a school. There are three main players: Michel Delassalle (Paul Meurisse), Christina Delassalle (Vera Clouzot) and Nicole Horner (Simon Signoret). Michel is a horrible husband, openly cheating on his wife with Nicole. He also abuses her physically. Christina is weak because of a heart condition, but also mentally, probably due to the many years of abuse she suffered at the hand of her husband. Nicole is the young lover. Christina is the head mistress of the school in which all three of them are teachers.

One day, Nicole shows up wearing sunglasses inside. She too suffered Michel’s wrath. Nicole and Christina start plotting. One day they sneak out together and travel to Nicole’s home town. Nicole still owns a place where they can stay. By telephone, Christina contacts Michel to demand a divorce. Michel of course is enraged and takes the first train. Once he arrives, he is drugged, drowned and wrapped in plastic. The next morning he is transported back to the school, where he is dumped in the pool. Now the waiting begins, but as time progresses he isn’t found. In fact, his body appears to be missing completely!

Where Les Diaboliques does differ from Psycho is in its delivery. Where Psycho may have the upper hand when it comes to climactic scenes, such as the shower scene and the ending, it isn’t as consistent as Les Diaboliques. The latter manages to keep a constant pace and a high level of suspense all throughout the film. In my opinion, the plot of Les Diaboliques also wins compared to Psycho’s. Finally, Les Diaboliques doesn’t feel as dated as Psycho, to me at least. But don’t let it stop you from viewing both, as they are among the best suspense films the world has ever seen.

The Human Condition. Three great films that, when combined, make up the best trilogy ever made. About war, suffering, pacifism and socialism.