I like lists and stats and I code for a living, so where’s the fun in celebrating the 1k mark when you can also celebrate 1024? Some neat lists and stats are in order. Because I like lists, and a top 10,24 poses some rather fundamental problems regarding basic physics, I’ll stick mostly to 10’s – or not. But some random stats first, starting with films per decade. I must admit that about 10 or 15 of the films I counted are actually short stories, especially those prior to 1920. It does roughly reflect my interest though. I love the 40’s and early 50’s. I should watch more from the 20’s, 30’s and early 60’s and I generally don’t really like late 60’s and 70’s films. 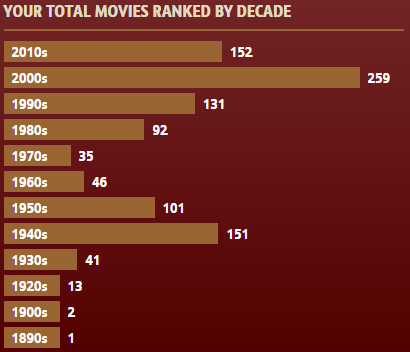 So for myself and whoever else cares, what does that look like in terms of lists? Top years, top genres, top directors, top films et cetera? It already leaves me wondering what those lists will look like when I hit the 2048 mark. But that’s going to be years from now, so bring on the 1024-lists!

So what does a lifetime of film watching amount to? 16 perfect 10/10 scores for starters. And only one 1/10. I make it a point to skip stuff I will probably not like. I failed miserably when I watched Epic Movie. It is – to date – the only film I ever fell asleep to, and it wasn’t because I was tired. But enough about that – who cares anyway. What do 16 10’s mean? Which 10 is better than all the others? To answer that, I found a neat site called flickchart.com where you can do infinite rounds of battles. A vs. B, which one is the better film. Pick one, next two films. Neat! It resulted in this list. The only problem with it is this annoying thing called time. A list lover’s worst nightmare, because it means orders of lists change continuously. But I guess this will do for now: 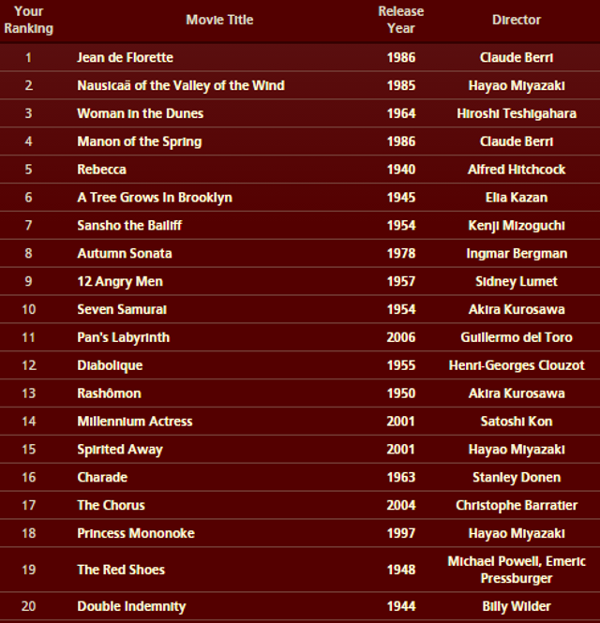 The best 20 films ever. That I’ve seen. In my opinion. Today. Keen eyes will have spotted that the years 1954, 1986 and 2001 particularly agree with me. Also, of the top 4 – which is really a top 3 – 75% is from the 80’s. After the 70’s that’s probably my least favourite decade. I also noticed three Miyazaki entries. I do like his films, and one or two more are in my top 100, but it still doesn’t make him my favourite director. That would be Kenji Mizoguchi, whose Sansho the Bailiff sits comfortably in 7th spot. Other stuff I noticed is that out of those 20 films, 8 are Japanese and only 5 are from Hollywood. The oldest one is from 1940, and the newest one is from 2006. The best decade is the 50’s with 5 films, followed by the 40’s and 00’s with 4 each.

So 1954 seems to agree with me, or maybe I just have luck picking the right things to watch. IMDb does this thing where it starts listing average year scores once you’ve rated 11 or more things from that year. It tells me my favourite year is 1962, with an average score of 7.78/10 based on 18 ratings. 1954 is second with 7.67/10 based on 12 ratings. 1950 – 7.47/10 with 17 ratings – completes the top 3. Way down at the bottom sits 1996 with a sad and pathetic 5.42/10 based on 12 ratings. The amount of ratings for these are all fairly low, making me believe luck plays a big part in how these are ranked. But looking at the years with over 25 ratings there’s still a clear difference between years I liked and disliked. I guess I should just ignore the extremes until I get some more data.

So I know what I like, right. If you’d ask me on a date what kind of films I like, I’d probably point out that I like Sci-Fi, quiet drama’s and (murder) mysteries. I also love old Film Noir detective stories, Japanese films from the 50’s and non-Disney animated films. I rather dislike bad horror, action and romcom films. So what does the data have to say here? It mostly agrees with me, but it puts Sci-Fi rather low on the list, and Romance rather high. So what’s up with that? Turns out I watch quite a few Sci-Fi films, and a lot of them were really really bad. This pulls the overall figure down a bit, making it seem like I’d rather not have purple aliens on my screen. Drama is so high because, well, like 50% of all films are tagged as drama’s. A bad one or a good one doesn’t impact the score much anymore. Oh, and I guess secretly I’m just super romantic. Hah! 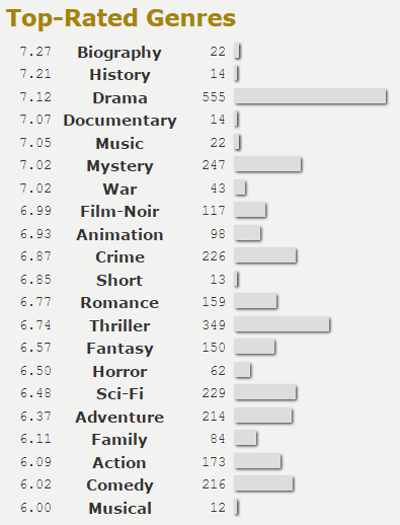 Westerns didn’t even make the list, because I need 11 and apparently I’ve only ever watched 10. Not my favourite genre I suppose. I hate war, but somehow love films about it. I guess it’s mostly because a lot of war themed films are actually anti-war. The absolute worst genre is Musical, although I admit I am a little confused as to why half of the films on there are even considered musicals. Second worst is Comedy. Now why did that happen? Maybe because Epic Movie is categorised as comedy. And lots of other crap I’ve seen on TV over the years.

Lastly a list not based on hard data. I had to leave out directors such as Yasujirô Ozu, Akira Kurosawa and Luis Buñuel because I haven’t gotten around to seeing enough of their films. Others like Satoshi Kon or Hiroshi Teshigahara just didn’t make very many.

The wall of shame

I haven’t seen The Godfather. That’s probably something I should work on. IMDb and especially Flickchart on its homepage give me this awful truth right in my face. But I can’t say I care. I suppose I’ll go and watch it at some point, but it doesn’t really appeal to me so it can wait. 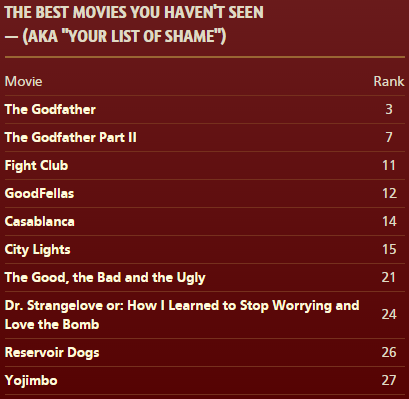 I think I’ll go and watch Casablanca soon. Or maybe Dr. Strangelove. To be honest, not many other ones really appeal to me. Maybe I’ll make my own list of shame instead. With Casablanca, Paths of Glory, Bicycle Thieves, Le Samouraï and Aliens from what’s on IMDb’s Top 250 that I haven’t seen. And Sunrise: A Song of Two Humans, The Passion of Joan of Arc, La Règle Du Jeu, Tokyo Monogatari and Le Mépris from the Sight and Sound Top 50 of all time. And finally Brazil, because I rather like having a Top 11 for a change. It makes for a nice list of shame I’d be very happy to work on in the years to come. 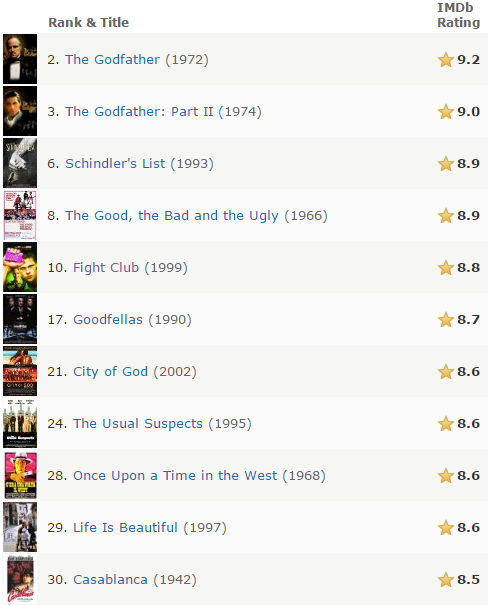 I have this little list of films I would like to see. It currently contains about 2000 of them. Now that’s a bit of a problem, because where am I going to find the time to do that? So a little sub-list has been forming, of things I really really want to see. Currently that list contains:

I have found a few of them, so now I just need the right moment to watch them. Bring on the next  1014! 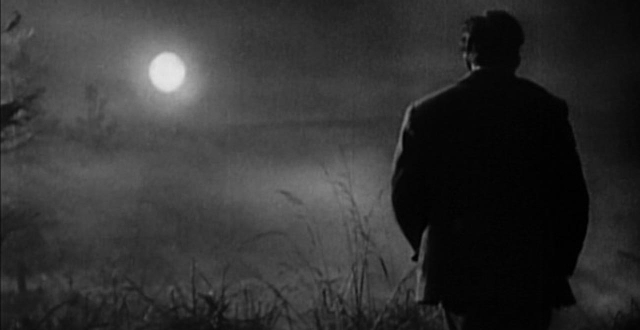 Theeb is a thriller and the first ever Jordanian film to be Oscar nominated. It’s about the coming-of-age of a young boy, Theeb, in the Jordanian desert during the first World War.