The Strange Love of Martha Ivers

Take a super star cast and a good story and you might just end up with The Strange Love of Martha Ivers. One of the most underrated film noirs I know of introduces a young Kirk Douglas to the big public. It was clear right away that this man would have a golden future. What a way to start your career among some of the greatest stars of the era and being just as good an actor as they are. Officially the leading lady here is Barbara Stanwyck. Just two years after Double Indemnity she stars in another film noir gem and once again she plays the role of a femme fatale. This time there’s a second dame added to the mix, Lizabeth Scott. She too steals the show as an apparently nice girl gone astray.

But the real main lead goes to Van Heflin, who plays the protagonist / sucker this story revolves around. The story starts with a bunch of kids in a place called Iverstown. I suppose coming up with good names wasn’t something they were particularly skilled at in the 40’s. Oh well. The kids are young versions of Martha (Stanwyck), Sam (Heflin) and Walter (Douglas). Martha and Sam are in love, but with Sam being from a poor family, it is a love that is destined to fail. One night, Martha’s terror aunt is killed by young Martha. The murder goes unsolved, but there is at least one person who knows what happened, young Walter. Walter’s family is what you would call brown-nosing the Ivers family. Walter’s father sees an opportunity to get his lousy wimpy son in a position of power. Sam disappears from Iverstown. 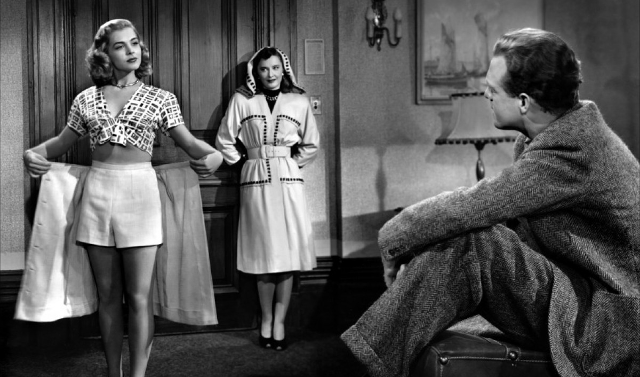 Years later, Sam – now a grown man – returns to town when he ends up in the stupidest car accident ever. While his car is being fixed, he goes around town and meets some old friends and a girl called Toni (Scott). They sort of hook up, but of course Sam ends up meeting Martha. She is now married to Walter, who is still a spineless man. I think the potential for relationship fireworks is apparent, so I’ll just stop here. The plot goes all over the place with who does Sam really love, why did Toni go to jail, is Walter always going to be a scared drunk and who does Martha really love. And then there’s that murder lurking over Martha’s shoulders. This can’t end well for everyone..

I really liked the film up to the final scenes. It has superb acting from all four major players. Scott and Douglas stand out for me, but no one dropped the ball. The story is quite good too, and told really well. But then comes the apotheosis, and for once a noir truly surprised me with a totally wicked ending. Especially for its time, with the production code in place and all. Usually Film Noir means all the bad guys die or go to jail, and the good guy gets to live another day, usually heartbroken, alone and without a dime. The Strange Love of Martha Ivers gets creative. I totally loved the ending. That’s all I’ll say.

This is what happens when you have too much time on your hands. Ever wondered which of the Golden Age actors and actresses were still going strong? I did, so after some searching this is what I came up with.