Ever in My Heart

Ever in My Heart is by no means a masterpiece of any kind, but it’s still a nice little film with very lovable elements. Even if this little film fails to amuse, it’s only just over an hour long. This is quite normal for pre-code talkies, as these films are often called. What a talkie is speaks for itself – badamtss – but what does pre-code mean? Hollywood in the late 1920’s and early 1930’s had to deal with a lot of scandals. The solution was to censor the   *beep* out of everything so people would behave. The Hays Production Code went into effect in 1930, but was only enforced from about 1934 and onward. This code dictated exactly what was allowed in a film and what wasn’t. Suicide, sex, bad guys getting away with being bad – that sort of stuff, was no longer allowed. It slipped Hollywood into a decade of happy-go-lucky romcoms and musicals, while directors were learning to deal with the code, and work around it. They succeeded very well in the 40’s and 50’s, most notably with film noir. The insinuation of the use of shadows and light, object placement and the power of suggestion were used to give the impression of things that were formally forbidden. Anyway, this is a pre-code film, meaning it didn’t have to adhere to these silly rules. What that means in effect, is that this film is full of life and of scenes and situations that would disappear from the screen for many many years to come. 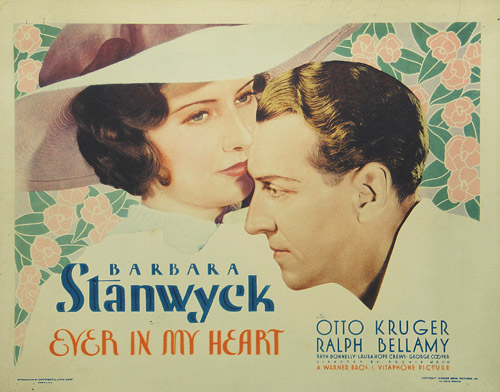 The story of Ever in My Heart is one that transcended time exceptionally well. It takes place just before the first world war. An American woman – Barbara Stanwyck – falls in love with a German professor – Otto Kruger. They get married and everything is great. They have many friends and the prof is even becoming an American citizen. The scenes of the party thrown for him to celebrate this joyous event are great to watch. It’s like looking right into the past, a century ago. But then the world goes to war and suddenly people stop showing up and the couple is shunned and ignored. The man eventually loses his job for being one of ‘them’, an evil German, even though he is American by law. Goes to show just how much that is worth. The marriage suffers by this and other tragedies, but the two seem very much in love. The poor man is torn apart by love for his wife and love for his country.

The story is pretty decent, although maybe the ending they chose is a bit weird. The final scene is pretty great, but it’s the getting there that feels a little off. Acting is wonderful. Barbara Stanwyck is great as always. No matter how poorly a script is written, she always manages to turn any film she plays in into something with a special feel. The script for this one isn’t too bad, but it’s not great either. It may be a little – ok quite – corny though. Stanwyck still delivers a very strong performance alongside Otto Kruger. He also plays his part well, as does the rest of the cast, but Stanwyck steals the show. The references to things such as sex and suicide might not be special for pre-code films, but they would be left alone for many years to come. The main subject is still very relevant in today’s world. We’re still very good at labeling entire groups of people for the actions of a few. We’re starting to like ze Germans, but today it’s the Muslims that are given similar treatments. Or refugees, or other minorities. Seems like we didn’t progress very much these past 80 odd years. All the more reason to give Ever in My Heart a chance, and learn from it. 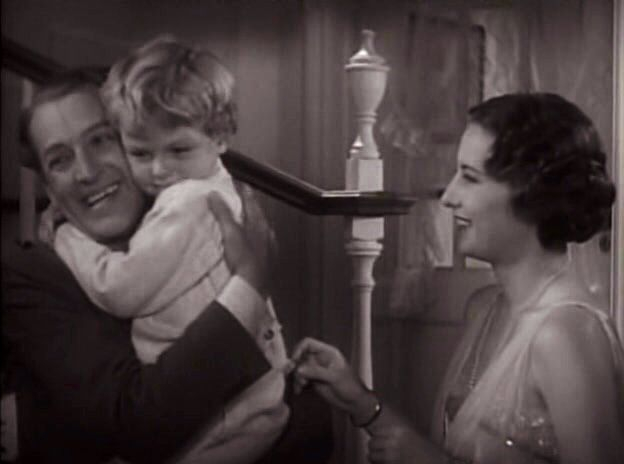 Little fun fact: Before living in Iverstown (as Martha Ivers), Barbara Stanwyck spent her days in the picturesque Archedale (as Mary Archer). They sure liked naming entire towns after her characters.

Possessed is a special film noir from 1947, starring Joan Crawford in what some call her best ever performance.